Our students are amazing. On the whole, their willingness to learn and appetite for education is quite inspiring to see in action, and we had front-row seats.

Each MADATrek team member was tasked with official classroom duties while in country, reflective of their specific skill-set and expertise.

Kate and Sarah were proficient in artistry, including calligraphy and water-colours so art workshops for both students and teachers were arranged in Anosibe and Itaosy.

English testing was to be completed for Grade 5 students at both locations. Margaret and Kerry stepped up to the challenge, with teaching being Margaret’s background and written communication, a passion for Kerry.

Andreas, our COO, was set to carry out annual audit requirements for the schools as well as address both Grade 6 classes on their pending English assessment.

CEO of the project, Brendan, was happily left to speak with the Grade 12 students, both leaving and current at Anosibe and Grade 10 students at Itaosy.

Preparation varied depending on the task.

Evenings were spent either reviewing the English paragraphs which students were to read aloud and ask questions about unfamiliar words or formulating a plan of attack for facilitating the art workshops.

Shopping trips were sandwiched in the daily schedule to complete the list of supplies required for the workshops. If you’re ever in Madagascar and in need of art supplies, Jumbo is your friend! We found most of what we were looking for and resolved to innovate for the rest. All week, little yogurt pots were reserved from our hotel breakfasts to serve as wash out cups for paint brushes, much to the amusement and sometimes confusion of our efficient waiters. We nearly lost a few to the rubbish by not guarding them fiercely!

To facilitate the comings and goings, teams were split so that on one day, workshops would happen in one location while testing in the other. After a day’s rest (where we went to a Lemur Park, watch out for that blog!), we switched it up and swapped locations.

As the days came, the ladies were nervous and excited to share their handiwork, ready to ignite any latent passions or hidden talents in their keen subjects. Over the sessions, Kate and Sarah found budding artists in the groups and were genuinely impressed at their aptitude for painting and calligraphy. In a short amount of time, students and teachers were working on masterpieces to rival their own. Left-over supplies were gifted to encourage more exercise of their new skills that could help them sustain a living in the future.

The first part of English testing was loud, unpredictable and entertaining for all. The students read beautifully and asked hungrily after definitions to words they had not heard before. Many times, those definitions came with vivid gestures and sounds to fully explain their meaning, which delighted students a great deal. The second part involved one-on-one reading of a set text to identify any difficult site words and inaccurate articulation. Nerves aside, the students performed very well and should have been proud of their efforts. It’s staggering to consider they are learning three languages concurrently!

Brendan enjoyed his time with the senior students, hosting a Q&A time and sharing a mentor-type chat, donning his ex-principal hat which he relished.

Andreas has built a recognised rapport over the years with the students, visiting almost every year. His address to the Grade 6 classes was a success as they respectfully listened and learned.

What a privilege to be included in the daily operations of the schools and to have an intimate view of education at work. Whether it’s cultivating a new skill, having someone believe in them or expanding their language acumen, education really does have the power to change a life! 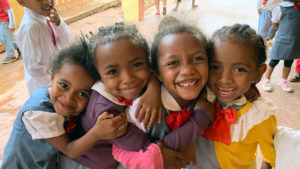 In Madagascar, there is a word that embodies the truest form of friendship, community and togetherness, which is found in the very fabric of the 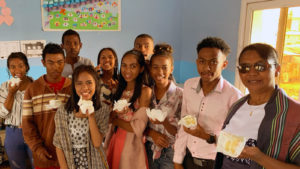 Milestones are worth celebrating. Last year, we saw our first Grade 12 students at the Anosibe Community and Learning Centre (CLC) complete 12 years of 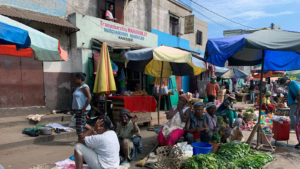 A City in Lock-Down

June 1, 2020
Project Madagascar is a committee of Civic Aid and Development (CH3138) which is a registered Charity for the purpose of the collection of funds from the public in Queensland.